Your browser is out of date.

You are currently using Internet Explorer 7/8/9, which is not supported by our site. For the best experience, please use one of the latest browsers.

Home Back to Home FKM / Viton®

FKM (Fluoroelastomer) is a family of fluorocarbon based fluoroelastomers.  Most commonly refered to as Viton® which was invented by DuPont in the late 1950's for the aerospace industy. The elastomer can be found in thosands of applications, from tank sprayers to the space station. The Viton® Brand is now owned and produced by Chemours Company.

FKM Elastomers are produced by several large chemical companies under the following trade names including 3M (Dyneon), Daikin (Dai-El) Solvay S.A. (Technoflon) and the most widely recognized brand (Viton®) by Chemours. These companies make the base polymer ingrediants that we compound into finished products for industry.

Viton® FKM Fluoroelastomer sheet provides excellent high temperature (up to 500°F or 260°C) and aggressive fluids resistance when compared with other elastomers while combining the most effective stability to many sorts of chemicals and fluids such as oil, diesel, ethanol mix fuels.

The performance of fluoroelastomers in aggressive chemicals depends on the nature of the base polymer and the compounding ingredients used for molding the final products (e.g. o-rings). Some formulations are generally compatible with hydrocarbons, but incompatible with ketones such as acetone and methyl ethyl ketone, ester solvents such as ethyl acetate, amines, and organic acids such as acetic acid. It is important to consult with your Stigall Technical Representive to choose the correct product.

Stigall Industrial Products is a preferred supplier of FKM (Viton®) sheet rubber and extrusions to the chemical processing industry in the Gulf Coast for over 30+ years.

Stigall Industrial Products only Supplies FKM (Viton®) that is produced in the USA. We offer Commercial Grade through the High Performance Viton ETP®.

Most of our FKM Compounds can be Extruded in Round, Square, and custom profiles. Molded FKM Shapes are available with a supplied Engineering Drawing.

Viton®, Viton GF®, Viton B®, Viton ETP® are Trade Marks of The Chemours Company.
Aflas® is a trademark of Asahi Glass Company 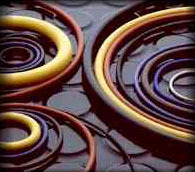 All items are stocked in Full Rolls. We will cut to your length requirements.

Please call us for current pricing and inventory levels.